Here are the 6 most common problems I have observed over the years working on mixing sessions:

For the lead guitar to be at comparable levels to the rhythm guitar, we would have to increase the lead guitar level about 25 dB using the clip gain feature in Pro Tools. The side effect is that the noise floor recorded in the track is also raised 25 dB, potentially making this track noisy at the healthy playing level of the rest of the elements.

Most of the sessions I receive come at 24-bit 48 kHz. Many producers are working sessions and recording at different studios using different session engineers and musicians and sometimes record at different sampling and bit rates. I personally use the file with the highest sample and bit rate to create a mix session with those settings. The rest of the files with lower settings have to be converted to match the highest sampling and bit rate of the project. This adds extra processing time when importing the session files into the DAW.

3. Multi-Mic instrument tracks out of phase

This happens more often with drum recordings but I have also seen it in bass and guitar recordings when using multiple mics to capture the instrument. When tracks are out of phase there will be cancelation of certain frequencies, more prominently the bass

frequencies. In this example, we have kick drum IN and OUT recordings that are out of phase causing the kick to sound thin and weak:

To align this track we can use the Invert AudioSuite plugin in Pro Tools. For other DAW’s any plugin that has a phase switch will work. Some DAW’s may also have a phase switch button on the channel.

Rendering this plugin in the Kick OUT waveform results in correct phase:

It is important to send individual tracks, as opposed to pre-mixed stems, in order for a mix engineer to have maximum impact in your work. Individual tracks give the engineer the flexibility to manipulate each element of the mix in order to come up with the best possible overall mix balance. When sending pre-mixed stems, the engineer will not have access to the mix elements and will not be as effective in getting a good balance for the mix.

A similar case happens when sending 2-track (stereo) beats and asking the engineer to mix vocals on top of the beat. Some level of success is possible if the beat was balanced properly, but in my experience, it almost always limits the potential the mix engineer has to have the most impact in the project.

Sending unlabeled tracks adds a tedious and time consuming step into the work of mixing engineers. The engineer has to solo each track to determine what they are before labeling them correctly. This example shows 5 electric guitar tracks with unlabeled names. Avoid this at all costs and your engineer will be happier.

Similar to unlabeled tracks, names that are too long are also painful for the engineer. Consider this track name: ​Dreamy And Soft Magic Pad​. Pro Tools and other DAW’s will shorten the name to fit the space in the track. This is the result for Pro Tools: DrmyMP​. The mix engineer has to open the track name window to have an idea of what the track is and then shorten the track to something like: ​Pad M​. Sending short and clear names simplifies the job of the mix engineer.I hope this list helps you become aware of some of the possible mistakes when working in your productions. Having a professional relationship with your mix and mastering engineer can make the music production process way more fun and enjoyable for everyone involved in the project! 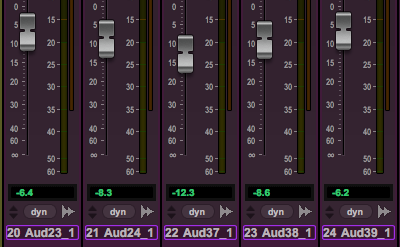 Where teams organise music together.